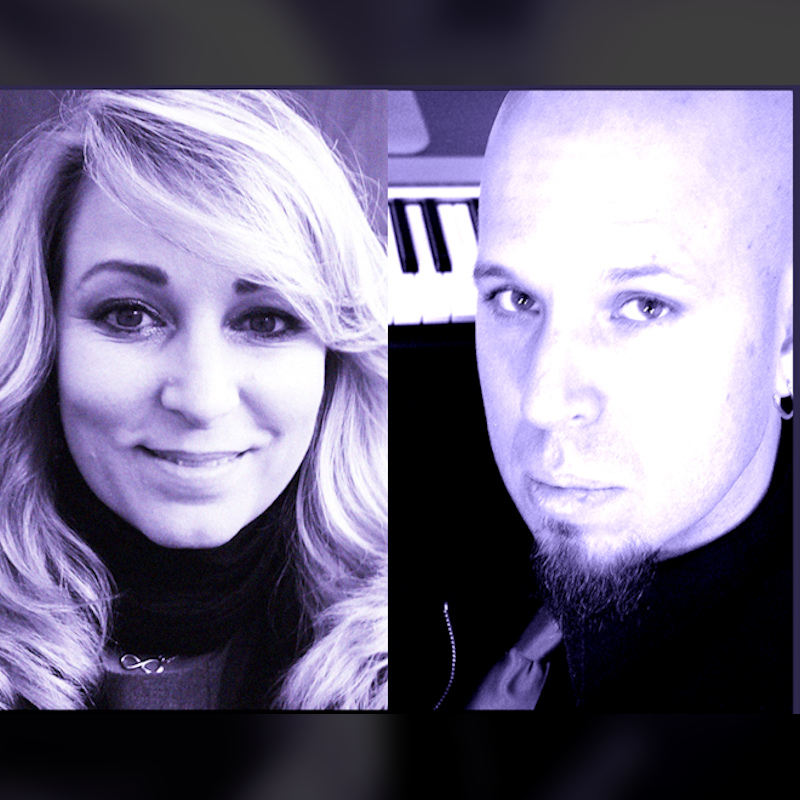 DG: What is your name and company name and URL?

Our writer/director partnership is named BadPoe, short for Jen Badasci and Christopher Allan Poe. You can find samples of our writing as well as short films at https://badpoe.net/

DG: What is your specialty…filmmaking or screenwriting? If filmmaking, which aspects?

Our first love is screenwriting. There is something about building worlds, creating entire Universes on paper that excites us. We’re driven by putting our characters into seemingly impossible situations and then sorta bearing witness to how they navigate their way out of it. We’re also passionate about producing short films. After years of producing sci fi/horror music videos, it seems like a natural transition to get into making narrative shorts in the same genre. We like to tell stories that are very visual, with as little dialogue as possible–more of a less is more approach. Shadows and smoke are so much creepier to us than showing the entire creature in full light. At some point, we intend to tackle a feature.

DG: What are you currently working on?

Right now, we’re working on writing and directing a short film in the same Universe as our screenplay, DARK NOISE. After that, we’ve got a new screenplay–mostly beated out–with a new concept that even our spouses don’t get to know about. Loose lips and all that 😀

DG: Who do you consider your mentor and why?

JEN: Actually, I met Chris through our writing mentor, Bonnie Hearn Hill. She’s a California author who taught us how to write fiction and non-fiction for publication. She’s also the first person who showed us that we could have careers in writing. After I graduated from college, I called Bonnie to find out if I could come to her writer’s table. Although we kept in touch through email, I hadn’t seen her in 15 years. It was a three hour drive to get to her table, but I didn’t care. Like a lot of writers, my motivation to produce is driven by having deadlines, so the trek once a week was completely worth it. Bonnie said, “Oh my god, yes. I can’t wait for you to come meet your brother.” Which I thought was such a bizarre thing to say, but she was right. Chris was most definitely my brother.

CHRIS: Jen nailed it. Neither of us would be here without Bonnie and what she’s done for new writers. As far as our influences, I lived a decent amount of time in Maine. Most people regard King as the most prolific and successful horror writer of all time, but in Maine, he’s a god. Apparently, every person who ever lived in Maine was his neighbor at one point. Jen and I have both read him since we were kids. We also appreciate how much he’s willing to do for new talent. As far as directing, it’s John-motherfucking-Carpenter for both of us. Jen even got me a THEY LIVE poster signed by Carpenter. She has THE THING 😀

DG::Why do you think the horror/scifi genres have such a large following?

CHRIS: Shit, this dates back to the beginning of human writing. The Bhagavad Gita. Most of the Bible is a horror story. The Grimm Brothers. The Penny Dreadfuls. Red Riding Hood is a cautionary tale of wandering off into the forest. The kids who heeded that warning lived. The rest were wolf food 🙂 To add to that, these days, most people reach old age. In the absence of Darwinian law for humans, we crave living in those life-or-death moments that provide the visceral reaction that makes us feel alive.

JEN: I agree. I also think it’s about straight-up caveman shit. That primal part of our brain that forces us to ask ourselves what we would do in a situation like those in horror/sci fi films. Unlike almost any other genre, horror and sci fi tap into the foundation of who we are as a species. I think most of us are pulled into our innate sense of survival when we watch horror or sci fi, and if the film does its job well, we, as our caveman selves, will feel satisfied that we would have survived that situation.

DG: What do you love most about this business?

JEN: Yep. It’s a great mixture of creating worlds as well as having an avenue for telling powerful stories that people can relate to.

DG: What do you dislike most about this business?

JEN: Yeah. There are a lot of bullshitters in this business. The closed system is also really disheartening.

DG: What career accomplishment are you most proud of?

CHRIS: It’s not pandering when I say winning the award for Best Sci-Fi Screenplay at Shriekfest. Jen and I have won awards for different things, but we’ve never felt more at home or with our people than we did at the festival.

DG: Any advice you’d like to give to newbies?

There are gonna be a million people telling you what you can’t do. Ditch them and surround yourself with the people who are doing it, or at least willing to get out and help push the car. Also, take control of your own narrative. In other words, if you want to make a movie, make one. Don’t give up your power to the industry machine. Dictate your own terms.

Denise, you’re a badass, and we appreciate all you’ve done 🙂